Preserving a Piece of Sunset History!

As the new John Campbell Primary facility is constructed to represent the future, a piece of Selah School District history remains to connect the past. 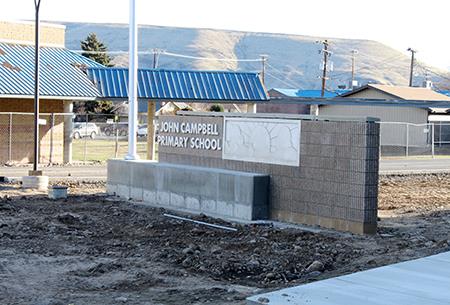 The Sunset Building on the John Campbell campus has a rich history, 93 years to be exact. Originally constructed in 1928, the walls of Sunset educated some of the District's first learners, and the rest of Selah's early schools were built in addition to the facility.

To preserve a piece of Sunset history, the District has worked with the architect and contractor to connect a piece of the old school to the new. Incorporated into the new John Campbell campus is the concrete piece of art depicting a sunset which has welcomed visitors for years to the Sunset campus. The art has received a fresh look as it is framed in bricks near the school's entrance.