Backlund Has Served Selah Schools and Students for 21 Years

The Selah School District has announced that Superintendent Shane Backlund has informed the Board of Directors that the 2021-22 school year will be his last in Selah.  Backlund is in his tenth year as Selah’s Superintendent, after dedicating eleven years to other administrative roles within the District.

On July 1, 2022, Backlund will assume the role of Deputy Superintendent at Educational Service District 105 (ESD 105) in Yakima.  ESD 105 supports the learning success of more than 66,000 students attending the 25 public school districts and more than 20 state-approved private and tribal schools in the South Central region of  Washington State. As a service agency, their purpose is to meet the expressed needs of local school districts by coordinating and conducting cooperative programs that benefit the educational needs of the young people in the four counties served.

In a statement to staff Backlund celebrates Selah’s accomplishments during his tenure and extends high hopes for a very successful future, "This was, without a doubt, the toughest decision I've ever had to make.  After nearly 21 years in Selah, this District is part of my DNA. Proud doesn't begin to describe the way that I feel about my time here.   It is going to be incredibly hard to leave people whom I have come to love and respect. I have grown tremendously as a person and leader, and I owe that to the time I've shared with people here, both past and present.  Together, we have accomplished so many amazing things for students and the community over the years. The Selah School District, because of the dedicated educators and support staff, will continue to work tirelessly to meet the needs of each and every one of its nearly 3,600 students.  This isn't goodbye yet, and I plan on putting everything I have into the next seven months that I will serve in this role; the staff, community and especially students deserve nothing less.”

School Board President Jeff Hartwick added,  “We are extremely grateful for Superintendent Backlund’s 21 years of dedication to the Selah School District and the incredible job he’s done in shaping and leading the District as our Superintendent the past 10 years. His positive impact with staff, students, parents and the community leaves the district in a very good place. We are thrilled he will remain in our community and wish him much success as Deputy Superintendent at ESD 105.”

The Selah School Board will begin the process of searching for Backlund's successor immediately. 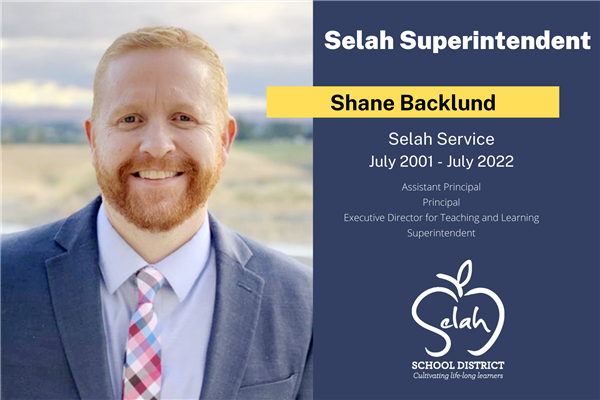