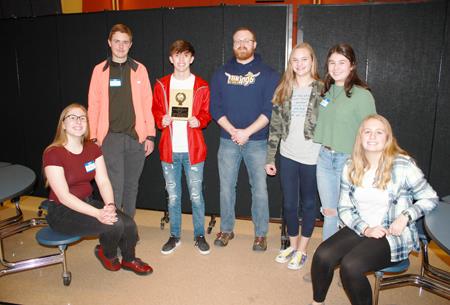 Selah High School.  After all, next month, Viking Knowledge Bowl competitors will be making the school’s seventh consecutive appearance at the state event.  The Selah streak was extended after a silver medal finish at the regional qualifying event sponsored by ESD 105.

While competing next month at the state tournament, which will be held at West Valley High School in Yakima on March 21, Selah’s knowledgeable contingent will face-off against other 2A high schools from across the state.  Representing this year’s Viking squad are:  Regan Duerre, Keegan Hull, Ella Peters, Colin Thomas, Lauren Thomas, and Robin Willey.  The team is advised by Selah High School teachers, David Dwyer and Matt Brown.

In Knowledge Bowl competition, high school teams of up to six members compete to answer questions testing student expertise in a broad range of academic areas, as well as logic and current events. Each event begins with a written competition in which team participants work together to solve a list of 60 multiple-choice problems. Teams then engage in a series of oral rounds against other schools in answering a series of questions.

Congratulations to the Selah High School Knowledge Bowl Team as they keep their state streak alive!