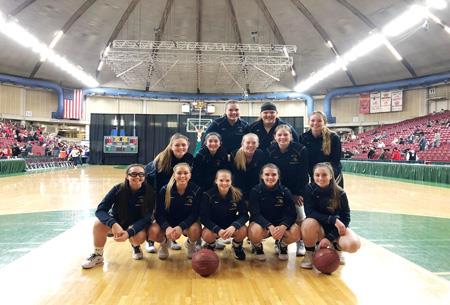 It was a slam-dunk for the Selah High School Lady Viks Varsity Basketball Team after being named Academic State Champions by the Washington Interscholastic Activities Association (WIAA) for having the highest grade point average (GPA) among girls’ basketball programs at the 2A level.

In earning the recognition for the 2020 winter campaign, the varsity team, under the leadership of head coach, Rick Hartman, had an impressive grade point average of 3.921.

The WIAA, Dairy Farmers of Washington, and Les Schwab Tires sponsor the Washington State High School Scholastic Awards Program.  Each athletic season the WIAA State Academic Championship is presented to the sport specific team with the highest grade point average in each high school division.  The Selah High School Girls Basketball Team will be honored during the state championships in March.

Congratulations to the Lady Viks Girls Basketball Team for its slam-dunk of being named 2A academic state champs!