In the world of dissenting politics, it is refreshing to see that two Selah High School students had the “write” stuff and the courage to have their voices heard by sharing their feelings on the greatness of America.

Freshmen, Natalie Keller, and senior, Jaden Anderson, were recently honored by the Yakima Veterans of Foreign Wars during its annual Voice of Democracy audio-essay scholarship contest.  Open to students in grades nine through twelve, participants competed by first writing and then recording a patriotic speech centered on this year’s theme of “What Makes America Great.”

For her work, Keller earned first place honors and her essay and speech will advance to compete at the VFW district level contest.  For his efforts in relaying what makes America great, Anderson earned third place recognition.

Congratulations to Natalie Keller and Jaden Anderson for having the “write” stuff and the courage to have their voices heard. 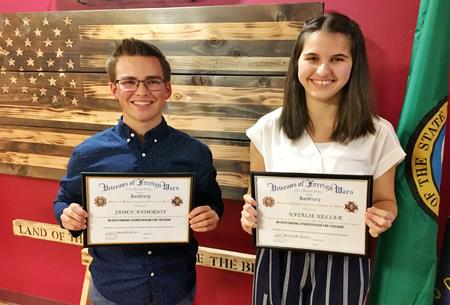