***This article relays in-depth information gathered by Selah Middle School students who participated in a project on "Human Trafficking."  The information highlights their research, as well as an interview with students.  Their work was exceptional and they should be commended.

For a group of Selah Middle School students, the statistics were too alarming to ignore, and, as they immersed themselves into a year-end English Language Arts assignment, the one number they could not overlook was 11.  Eleven.  This number, students found, is the figure that signifies the bottom of an age range, 11-21, when human trafficking statistically begins.  For these students, who themselves are not many years past age 11, the figure signified one of the alarming statistics that motivated them to turn a classroom project into the need to act.

As part of the assemblies students coordinated with the Yakima Police Department and Detective Mike Durbin and Captain Jay Seely, who are also parents of Selah students.  The agenda highlighted the crime of human trafficking and how traffickers target and lure young people into the trade.  Detective Durbin and Captain Seely also brought awareness to dangerous social media statistics and online communications affiliated with the crime.  In addition to their project research and the organization of the assemblies, the students attracted awareness to their cause by creating buttons and brochures, designing t-shirts and slide shows, making posters and banners, distributing flyers and cards, conducting surveys and writing public service announcements.

“These students should be proud,” said teacher, Kay Smith.  “They brought awareness to a rising, crime and were dedicated to gathering information and presenting their work to create vigilance to the issue.”

The Call to Action

The subject of human trafficking is probably not discussed in most middle school classrooms.  However, this team of researchers knew if they were not familiar with the crime, others would not know its dangers either. Students said if their information could help one person understand the risks associated with human trafficking, then their long hours of work would be profitable.

The students’ project originated in Kay Smith’s and Tawni Martin’s English Language Arts class where they were tasked with creating a multi-media campaign.  After thinking of subjects to pursue, students became interested in a topic that a substitute teacher suggested—the rise of human trafficking.  After hearing trafficking stories about the escalating national crime, including the Yakima Valley, students decided to learn more so they could educate.

In their research, the students found that human trafficking is challenging to classify because of the percentage of runaways who voluntarily leave home and cannot be located.  After all, running away is not a crime. However, their research also alarmingly uncovered the statistics of individuals who are lured, kidnapped, and confined within the trafficking trade.  The numbers reflect that each year, 600,000 to 800,000 people are trafficked across international borders, and, in all 50 states, human trafficking percentages are on the increase with 300,000 Americans under the age of 18, targeted.  Although the largest percentage of victims are female and children because of their vulnerability, males are lured into trafficking too.  Further, students discovered that while the national statistics are alarming, so too is Washington State data where human trafficking reportedly doubled between 2012 and 2017.

Students detected that human traffickers pursue the naïve.  Runaways are targeted, as are those looking for a sense of belonging.  Social media is a big attractor, where traffickers employ manipulative techniques to lure victims.  In the social media realm, the perpetrator finds an individual willing to communicate, befriends them, builds trust, and may even ask for requests of help, or make promises of assistance.  Then, once a comfortable relationship develops, the perpetrator traps the target.  It is estimated that once drawn into the human trafficking system, one in three individuals are trafficked within 48 hours.

Life Within the System

Once in the trafficking existence, students unearthed that life in the system is not idle, but one of constant transportation. Frightened, victims are moved to different cities and states so they cannot become comfortable in their surroundings, and no traceable roots can be established.  While on the circuit, some victims are sold between six and eight times a day because of instant profit.  The students exposed data that reveals human trafficking is a $32 billion-a-year industry and is the most profitable in the United States next to drugs, because the sale of an individual can occur repeatedly, meaning a profit every time.  Although lucrative for captors, the victim’s reality is not romanticized.  There are beatings, punishments for not following rules, unwanted pregnancies and the mental cruelty of victims to make them feel worthless.

Why Do They Stay?

Some individuals enter the human trafficking lifestyle with the intention of participating only once; others end up partaking repeatedly. As students learned, the reality is that once individuals become embedded in the trafficking system, it can be hard to leave because their self-esteem has been stolen, their families have been threatened, or they have been blackmailed that if they leave identifiable information about them will be posted to social media.  Also, once entrenched in the trafficking lifestyle, some victims stay for what is provided—protection, a phone, electronics, clothes, and food.  Students recounted a story of a teenage girl who wanted a bag of Cheetos, and she was used three times in a day with the promise of, “We will give you what you want, if you give them what they want.”

After weeks of research, the teen investigators want their peers to be aware of their surroundings, be cautious when utilizing social media, and most importantly, if they see something—say something.  After all, diligence begins at the bottommost starting point.  In this case, it is the number 11.  Eleven.  The smallest figure that motivated a group of eighth grade students to act. 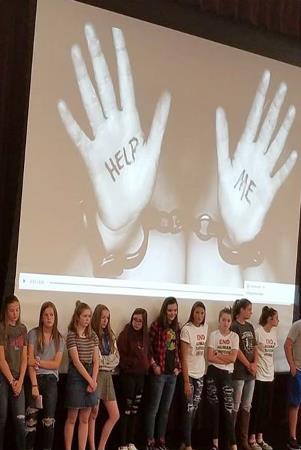 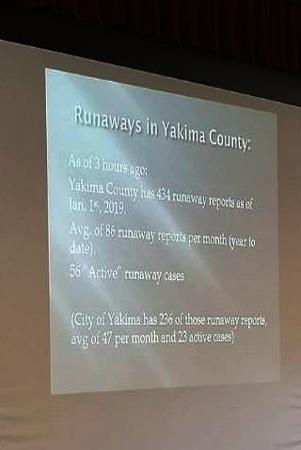